So, one of my first posts was about how creating this cake really inspired me to keep moving forward, and challenging myself in the cake world. I realize that in this posts I showed you some of the steps that I took to make this cake, but it was not at all comprehensive. I have been asked a lot about how to make the pirate ship so I thought I would share a better tutorial with all of you. Please excuse all of the mess in the pictures I never thought that these would be out on the internet for all to see.

So, first you want to start off with carving the cake into something that resembles a pirate ship. I have foam core in between the cake layers for support. If you have not followed my blog since the beginning then you don;t know that this cake was to be driven 20 hours plus to Tulsa, OK for a big competition. 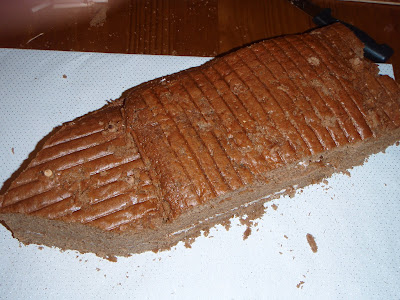 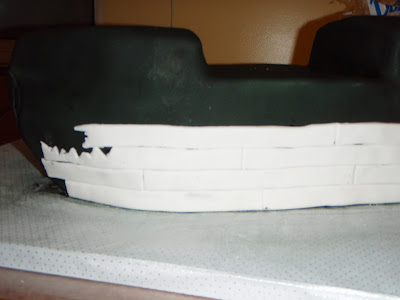 Since, this cake was being attacked by a krakin, I laid out where I wanted the krakin to attack so I could plan ahead where to place the tentacles. 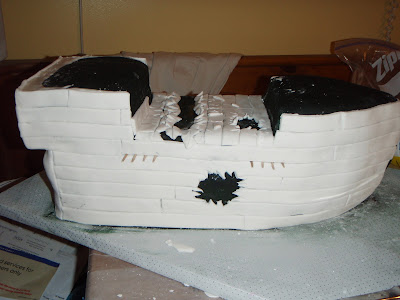 I then airbrushed the entire cake brown. 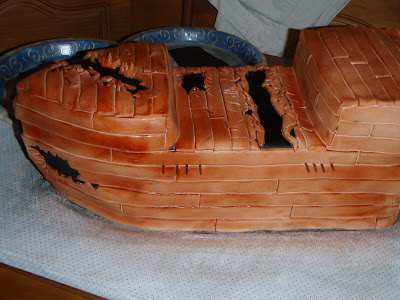 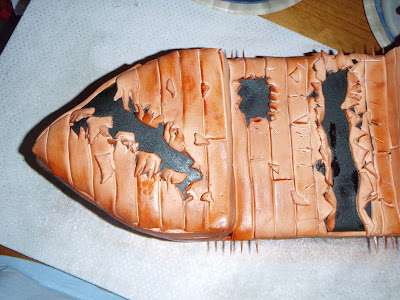 Next, I went back over the entire cake with gel food coloring to add depth to the ship. You can see the difference between the side of the cake, and the top of the cake, which had not yet been painted. 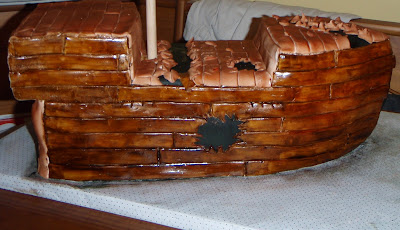 I then added the rails using toothpicks for support. If you are going to make a ship that is being attacked make sure you leave some of the railing broken, and disheveled. 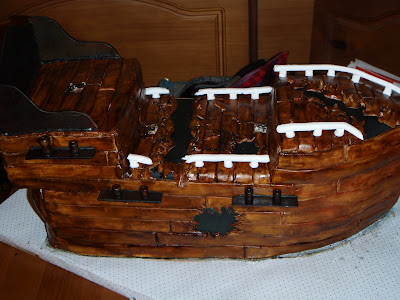 Here are the tentacles that I made to attack the ship.If you cannot tell I airbrushed them with purple, and green to add depth. Again, since I had preplanned where I wanted the tentacles to go I knew what shapes to make them. 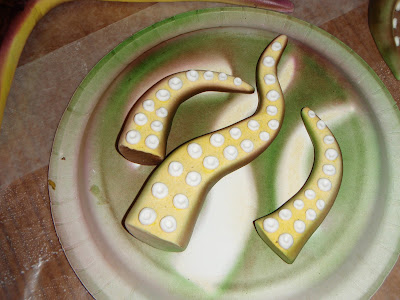 The masts are wooden dowels that I covered in fondant. I drove the dowels through the foam core for support. I made the sails (not pictured) out of gumpaste and then let them dry for a long period of time before trying to attach them. 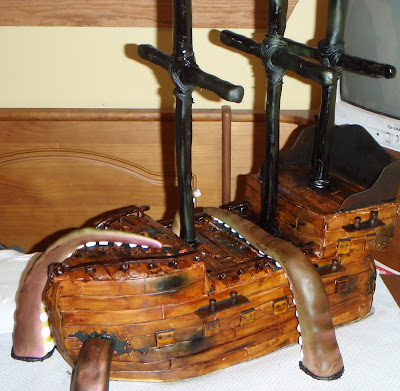 Here is the cake all ready to make the trip to OK. 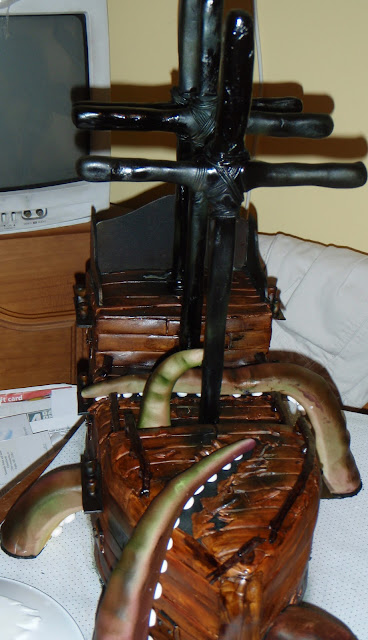 After a long long trip we finally arrived, and I finished decorating the ship in the hotel room. (It had been a long trip, and I was tired so ignore my great outfit). I used blue royal icing to make the water, and them added white royal to make the foam from the krackin's arms. I attached the said to the masts with royal icing, and let them dry. 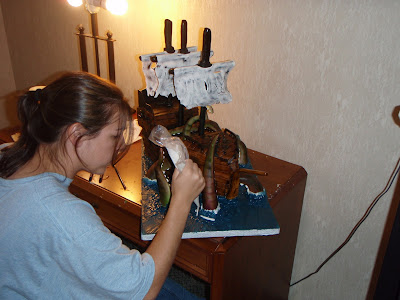 I added some other small details such as broken ropes, and broken ship planks to the water for effect. 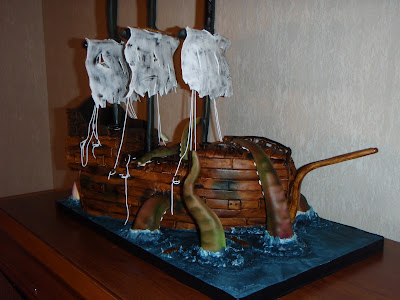 Here are some close-ups! 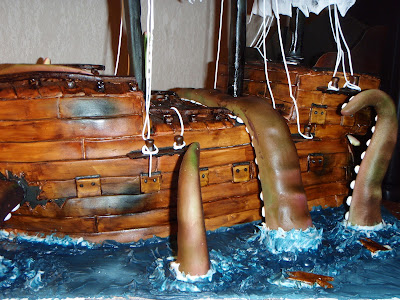 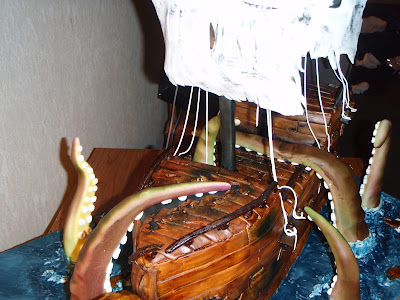 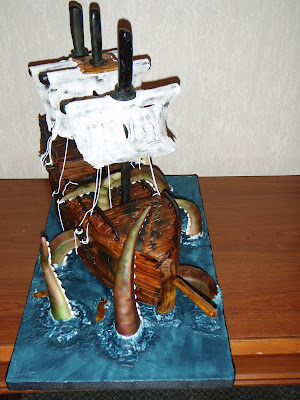 Here it is at the show with the awards! 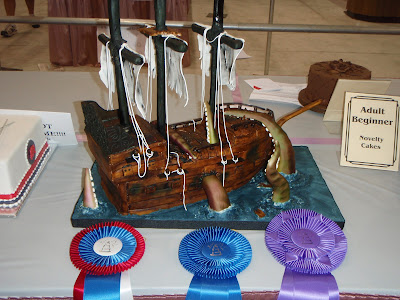 So, I hope you enjoyed this little tutorial, and I hope it helps some people in the future when creating their great pirate ships!
Posted by Samantha @ Food Fitness Family Friends at Monday, November 07, 2011

Wow, what a great tutorial! There were so many elements but you really planned them out well and they came together beautifully! You are very talented - I hope you save room for more awards!

OMG! i love the tentacles BLASTING out of the ocean... awesome tutorial, and congrats on all the ribbons!! i highly doubt you will be in the "beginner" category for much longer! ^__^

Thank you both! Lyndsay- you are right I no longer enter the beginnner's category! :)

Beautifully done! What type of gel food coloring did you use and how did you apply it?

Thank you Kristy Terrell. I use Americolor gel food coloring and mix it with vodka to apply. I just paint it on with a paintbrush.

Good day! I was so impressed to see a very well-presented dishes that is absolutely tasty and delicious. You've done a great job.Well, thank you for sharing your talent and article it is very well appreciated. You can also visit my site if you have time.

Oh my goodness! an amazing article dude. Thanks Nonetheless I'm experiencing subject with ur rss . Don’t know why Unable to subscribe to it. Is there anyone getting similar rss problem? Anybody who knows kindly respond. Thnkx usa online casino

Promote Your Page Too

Read all of our Wedding Cake Reviews at

I hope you enjoy my blog. Feel free to leave a comment by clicking on "comments" at the bottom of any post. I love knowing you stopped by!